"MY MISSION IS TO CREATE MUSIC THAT PROMOTES & CELEBRATES DIVERSITY...
BUT MOSTLY I JUST WANT TO MAKE PEOPLE DANCE"
- ANITA

"Anita's blend of Latin, Dance and Pop music offers something for everyone. I like every track and the vocals are divine."
- Randy Schlager, Billboard

“Anita has a beautiful voice. I love that she writes in three languages. She could really give Brazilian Girls a run for their money.”
- Multi Grammy Award-winner Asdru Sierra, Ozomatli

“Anita is a delight to work with. She has a unique voice...what she does is amazing.”
- Camilo Lara, Mexican Institute of Sound | EMI Mexico, Former General Manager

“Anita will be to Latin Hip Hop what Selena was to Tejano.”
- HighSpeed Magazine

“Eden’s apple was surely tempting but not as seductive as the sultry vocals of trilingual chanteuse, Anita Benner.”
- Thomas Fawcett, The Austin Chronicle 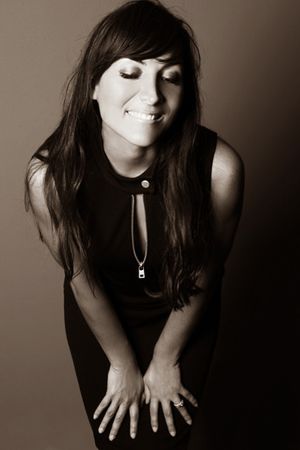 As the lead singer/songwriter for the Latin Hip Hop group Los Bad Apples, Anita opened for Grammy Award-winning artists Ludacris, Duffy, Ozomatli ft. Chali 2na, Meshell Ndegeocello, Oscar D’Leon and others. In February 2009 she turned up the heat across the Middle East on a Tour for the Troops, and in August 2009 earned a Best Band nomination from Univision.

On Valentine’s Day 2010, Anita joined forces with Mexican rock star and producer, Gil Gonzalez (Genitallica), to release the electro-pop album “Lover”. Billboard’s dance reporter, Randy Schlager, remarked, “Lover’s blend of Latin, Dance and Pop music offers something for everyone. I like every track and the vocals are divine.” The album was released under the artist name Five Alarm Fuego and includes a collaboration with electro-cumbia pioneer, Camilo Lara (Mexican Institute of Sound).

When she’s not writing and recording her own music, Anita works with an array of international brands in the Fashion and Specialty Retail space to help them connect with their customers through a comprehensive suite of Experience Design solutions. Those solutions include Music programs that are curated to capture the brand’s energy, image and attributes, Artist Partnerships, custom Video and Digital Signage, Scent, Mobile Marketing, and Voice Overs (which she's often hired to record). Anita was a Music Programmer for many years before expanding her role to cover all services, and one of her favorite parts of the job is discovering emerging artists and giving them a platform for their music to be heard via Mood's extensive catalog of music channels. You can hear Mood's programs on DirecTV and Dish as well as anytime you walk into a mall, store, hotel, restaurant, cruise ship, etc. We’re heard by over 150 million people every day, meaning we reach more listeners than any terrestrial or satellite radio station in the world!

designs World, Latin & Pop music programs for an international portfolio of clients ranging in industry from hospitality to fashion retail. If you’ve ever stayed at a Westin, Doubletree or Cambria Suites Hotel, cruised the Mediterranean with MSC Cruises, shopped for shoes at Champs Sports or jewelry at Claire's/Icing, or flipped through the music channels on DirecTV, chances are you’ve heard Anita's programs. She also consults clients on the benefits of catering to Hispanic shoppers by incorporating Spanish-language music as well as Spanish on-hold and in-store messages (which she often lends her voice for) in their commercial spaces.